Grow Your Own Vegetables Course 2009 - our plot

Here's the plot at Foster Road allotments, Trumpington that we used to grow vegetables in summer 2009.

We have just harvested calabrese, shallots, beetroot and the last of the broad beans. A pumpkin and some parsnips are still growing strongly.

The calabrese we planted in the brassicas area is doing well, as are the broad beans, shallots and parsnips. On the downside, most of our potatoes suffer from the manure contamination, whilst the lettuce and beetroot were hit by a more familiar enemy: slugs. We resowed beetroot and most of that is doing OK.

We have planted four rows of potatoes (the ridges are visible on the right picture) and also two rows of parsnips with fast-growing radishes intersown as a marker. We squeezed a row of lettuce in between the parsnips as a catch crop. In the "others" area are shallots, with space for beetroot and more!

The orange area is for potatoes and roots, yellow for "others", and green for brassicas. See the course book, page 4.

Snow fell several times this week, and sub-zero temperatures are forecast to continue. This is good news for our plot! We will explain why at the first session.

We dug two thirds of the plot today. This preparation should allow the group to start sowing at the first practical session on March 7th. Thanks to Dave, Kim and Rowan for getting this task done speedily ahead of the snow which is forecast.

We strimmed the weedgrowth and old sweetcorn plants today. This will ease digging, after we have raked up the old plant material and started our compost heap.

The plot grew sweetcorn and other crops last season. The tenant is abroad and agreed to let us use it until she returns to Cambridge in October.

Back to main Grow Your Own Vegetables Course page. 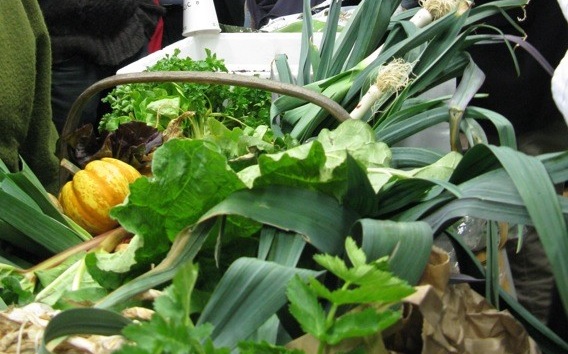