About the Growing Spaces Project

The Growing Spaces Project aims to increase the number of food producing public and community spaces in Cambridge. Growing Spaces can be public spaces, unused bits of land in your community, college owned spaces, school gardens, rooftops, window boxes, containers, raised beds or any other option we can think of! Imagine, if we added up all those little unused areas, how much local food could we produce, and how much would it improve the quality of our city?

The project has been active since Spring 2011, and was run by Stephanie Ferguson until Autumn 2013. It is now being revived and we are still very much looking for volunteers who can help us maintain our public spaces in the long-term and create new ones. Contact Toni if you'd like to help!

We have hundreds of photos from this project and details on the process of transformation for all of the spaces we reclaimed at our website here: http://www.cambridge.growingspaces.org, so please visit for more information! You can also join the Facebook group for more rapid updates and exchange, and join the mailing list by asking Toni. 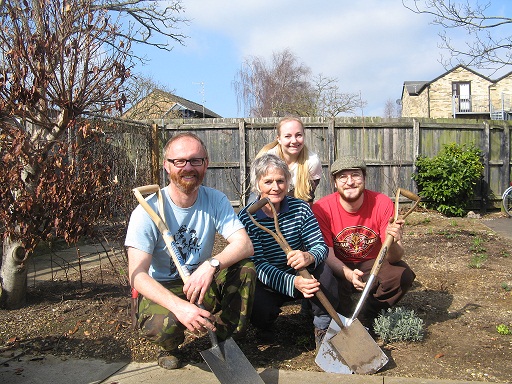 Who takes care of these spaces?

I'm thinking of volunteering with Growing Spaces - how much time would I have to invest?

What's the difference between a public space and a community space?

Are you concerned with vandalism?

A big thank you to Scotsdales, Ridgeons, and Cambridge WoodWorks for their in-kind donations!

Thanks also to P&G's Future Friendly Contest. In the 5th annual awards (2011) we were the area finalist for the Anglia region and won Ł1000 for use towards the project. Thanks so much to all those who voted for our project!

And finally, a huge thank you to Sustainable City Grants for their support of this project! We were one of the recipients for the 2012-2013 funding year with a grant of Ł3000.

Here are some pictures.

Recently on our blog