More details to follow when the minutes of the council meeting become available. Excellent job Dave in presenting this (and the Food Group folks who helped review the pitch during our Wednesday meeting).

The following motion was been proposed by Cllr Lucy Walker and seconded by Cllr Rob Dryden and RESOLVED (by 38 votes to 0).

The Council calls on the Executive Councillor for Arts and Recreation to bring forward a report to the Community Services Scrutiny Committee which:

The Power of Community film showing at the Arts Picture House attracted more than 200 people and they up-graded us to a larger theatre!

This was such an important event, it rates a page of its own.

Local food ingredients, secret recipes and just a little cooking expertise can combine to produce some tasty results. The Food Group held a Chutney making event with Trumpington Ladies on November 25th using windfall apples and home grown onions to make some delicious apple chutney. This is the first of a series of events to pass on home cooking knowledge and apply traditional methods to preserve fruits and vegetables beyond their normal growing season. Besides the wonderful chutney it also provided an enjoyable social get together marked with lots of cups of tea. Next stop marmalade. 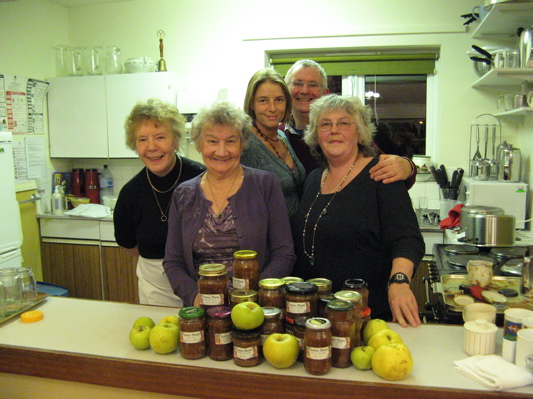 Dave Fox, Kim Warren and Carl Myhill handed over a substantial petition of 700+ names to Councillor Julie Smith. Such a sizeable petition is sufficient to grant us the right to a 5 minute hearing at a full council meeting. Here's what the Cambridge Evening News had to say about it.

If you want to add your support to this initiative, please let your Local City Councillor (click on the menu on the left of the screen to find the councillor for your ward) know your views in advance of our council hearing on December 4th. David Howarth, MP for Cambridge met with Carl Myhill and Colin Clews of the Transition Towns Food Group to discuss our campaign for more allotments in Cambridge. Armed with a recent allotment survey (September) and other information provided by Dave Fox, we had a good discussion with David. He agreed to support allotments at the national level as well as supporting us locally. David had a careful read of our petition and found himself able to sign it too - a clear demonstration of his support for us on this issue. He provided some very useful insights in how to progress our campaign and a number of other avenues we might explore. This was a very worthwhile meeting!

The need for change in our society is becoming ever more apparent. But most of what is talked about is the external changes – what will we make and use, how will we feed ourselves and heat our homes, how will we pay for it all? The part that is more rarely explored is the inner world of individuals and society during this time of great change. Why have we made a system for living that is inherently unsustainable? Are we addicted to consumption or to oil? If so what can we do about it? What is the inner journey that we need to take to move towards a life based, sustainable human presence on the earth? All these questions were explored, as well as looking at how this process can be helped – or hindered! – by groups working for a sustainable, healthy, abundant, vibrant future.

Biography Sophy Banks has worked in the Transition Town Totnes project since its inception. She co-facilitated the Heart and Soul group for its first year and has jointly founded Transition Training. She has worked as an engineer, systems consultant, project manager, therapist and constellator. She is fascinated by systems and people, how groups work or not and the process of change. Too old to slide tackle in the mud on Hackney marshes, she has given up football and now lives in Devon where she walks and cycles on Dartmoor whenever she can. 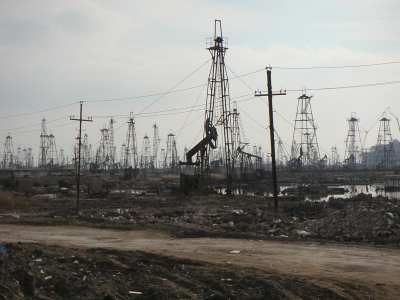 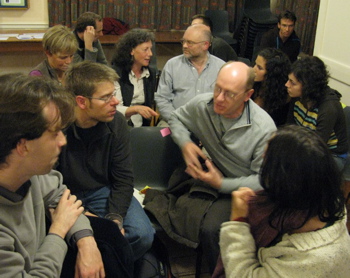 The hall was full and we were all prepared to be shocked. Even as someone who (thought they) knew it all before, it was an eye opener, with images such as a glamorous model in front of her dressing table, gradually stripped of all her oil-dependent frippery (but curtailed primly at the underwear stage) and an ugly vista of the depleted oil fields of Baku hundreds of still and silent derricks like burnt out trees, rotting in a swamp of oily mud.

As the experts on the film told us, we cannot know for certain when the peak in production will occurr because so many oil fields are owned by governments who publish unaudited accounts. The rules of OPEC say that production quotas are linked to reserves so there is great advantage in exaggeration. However, they said the peak must come within the next five or ten years at most. The effects of dwindling supply for an increasing population will mean big changes in our lives.

After the film we cheered ourselves up by talking about the good news, such as the potential of the transition town movements and the fact that governments are starting to take on board the climate change agenda too, as long as we keep pushing them. The organisers collected our suggestions for what can be done about it, at government, local and personal levels, (click here for the results) and we talked about the benefits as well as the difficulties of living in a less oil dependent culture.

The Transition Towns Food Group teamed up with Dave Fox of the local Cambridge Allotment Network to promote local allotments and campaign for more land to be made available for allotments in Cambridge. We sold some local veg for the Trumpington Allotment Society and got around 300 names on a petition for the local Council.

We had an impressively busy time talking with loads of people interested in growing food, members of the council coming to talk with us, the former mayor (Jenny Bailey) and councillor Jennifer Liddle.

Overall we are really pleased with this event and the public response and were extremely impressed with Oakleigh Fairs who organised the fair (especially Emma and Charlie). We were very impressed that Dave Fox and Kim won so many of the best vegetables prizes too! The gauntlet is well and truely down for next year!

The petition for more allotments in Cambridge City is now closed. Thanks to all who signed!

On 14 August, Cambridge Buddhist Centre hosted the first larger showing of a transition film in Cambridge – ‘The Power of Community’ - in their beautiful theatre space, attended by over 30 people. This inspiring film shows how Cuba made a transition to a lower carbon economy during the embargo imposed by the USA.

This was our first public event. We used the Open Space format (see http://en.wikipedia.org/wiki/Open_Space_Technology) to encourage people to form small discussion groups around topics of their choice, based around the question "How can we make Cambridge a resilient community, less dependent on fossil fuels?". It was a great place to meet like-minded people and there were lots of dynamic discussions on a range of topics about resilience for Cambridge. Discussion Reports

This was our first awareness raising activity, and it went really well. We spoke with over 200 people, and gave away lots of food plants.

We invited the mayor to meet with us so that we could tell her what we were doing and get her advice on how to work with the council. She was already aware of the issues and was very encouraging.

Transition Cambridge aims to help Cambridge make the transition to ways of life that are more resilient in the face of rising energy prices and a changing climate.