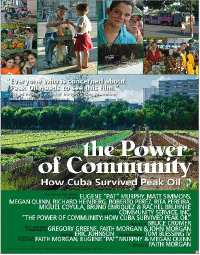 The evening of 25 November was the first Transition Cambridge event in a mainstream venue and we were astonished and delighted by the response. Forty minutes before the start tickets had already sold out and we were offered a larger screen, with a capacity of 150 seats, thanks to the generosity and flexibility of the Arts Picture House. Even so, by the time the curtain went up we had filled the cinema, and had had to turn away around 100 others!

Trish Shiel, Film Education Officer for the Film Consortium who sponsored the event, inroduced the program and then Corrina Gordon-Barnes, one of the founding members of the Transition Cambridge initiative, described how the film sparked off a personal transition in her life. Her brother, an expert in the field, had been talking about Peak Oil for years, but she had been avoiding the issue because it made her feel so hopeless. Then she watched 'Power of Community'.

The film shows how Cuba responded to the sudden economic isolation it faced following the fall of the Soviet Union in 1990. With oil imports cut by half and food by 80 per cent, Cuba transitioned from a highly mechanized, industrial agricultural system to one using organic farming methods and local, urban gardens. Out of this period came a greater sense of community and connectedness, and the change in diet and lifestyle actually improved the nation's health. It offers a unique example of how the problems arising from Peak Oil can be successfully managed.

Before and after the film, in the spirit of community, Corrina asked each person in the audience to turn to a neighbour who they did not know, and ask them, first, what had brought them there that evening and then, in the light of the film, what they would like to see in Cambridge.

After that, James Southwick, of Transition Cambridge explained a little about how Transition Initiatives came about, what they seek to achieve, why he had felt inspired to get involved and the Cambridge movement. As he said, Transition Cambridge is currently involved in the initial awareness raising phase of the project, bringing into the public mind the twinned issues of Peak Oil and climate change. Transition Cambridge also wishes to support and inspire the emergence of sub-groups to initiate practical actions and so far there are two which have emerged: an Education group, who have developed workshops to roll out to schools and neighbourhood groups, and an extremely active Food Group, who were that evening unleashing themselves onto the public at large for the first time. With that James handed over to Colin Clews of the Transition Cambridge Food Group.

Colin described some of the exciting projects that were already underway in the city such as the Learn to Grow Food workshops, the campaign for more allotments, the Community Orchard in Trumpington and the garden share project, linking people without land who want to grow food, with those who are unable to cultivate their land but are willing to offer it. He pointed out that there are difficult questions that need to be asked and challenges ahead, but that should not deter us.

Corrina then invited everyone to sign up to the e-bulletin to be kept up to date with what’s happening and how to get involved, and also to speak to any of us wearing badges after the event.

Finally there was a short but lively Questions & Answers session. The panel (David Ellis, Ceri Galloway, James Southwick and Irma Allen) frequently invited the audience to find the answers and be part of the solution. There was clearly a groundswell of interest and engagement with issues being raised.

Those of you who were unable to get in this time round will be pleased to hear that there will be another opportunity to see the film soon.

Isn’t there in urban agriculture an issue of too high a concentration of lead in the soil because of the increased pollution?

Petrol is unleaded nowadays; Cuba didn’t seem to be so car free and yet happily grew food; Would you be interested in finding out about this yourself?

Do we have to become so extreme as to turn all available land to food production? Why not use the existing farmers outside Cambridge?

Responses are required at every level; they are all important. Personal, Local, governmental.

Doesn’t the idea of growing your own, and buying less stuff put us directly at odds with government calls for us to keep on spending to get us out of the current economic mess the country is in? Will we get much support from government?

We need to change our ways regardless of the dictates of government, indeed there are signs that our elected representatives do understand the need to reduce consumption and want to do the right thing. But they need to feel the public is behind them, so welcome grass-roots action to do this work.

One gentleman told of a story of how he had come to be there that night:

He is making a film about inspirational people and their visions of hope. When asked where to look for hopeful work today in the midst of ever-present negative images one interviewee replied ‘Transition Towns’. He later looked on the Internet for any local initiatives and saw Transition Cambridge and the evening’s event so got on his bike from Milton and the rest, as they say, is history.

Transition Cambridge aims to help Cambridge make the transition to ways of life that are more resilient in the face of rising energy prices and a changing climate.